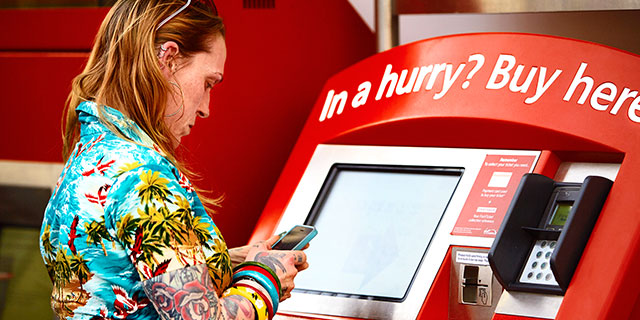 OWING to a series of unlikely, unavoidable, and yet entirely in character, events I was cutting it fine if I was to catch my train on time.

And so I arrived at the station in a blur, the heat of the day and the stress of the taxi journey through roadworks combining to turn me into a sort of sculpture of myself made entirely of sweat.

My train was already at the platform, tapping its watch, and asking what time I called this. I did not have time to explain to it, I had to pick up my tickets from one of those machines because I had booked online.

There were passengers queuing for the ticket machines, which was not ideal. I looked across at my train. “Oh, don’t worry, mate, I can wait all day. It’s not as if I have to be anywhere,” it said.

Luckily, I remembered that there was a “secret” ticket machine, one not immediately apparent to passengers in a hurry. I scurried to it and discovered it was free. “Ha,” I thought about the passengers queuing at the other machines, “you massive chumps.”

I found the booking code and attempted to type it using the touch screen. Those of you with Apple devices will be aware that touch screen technology has improved markedly over the past few years, making it possible to type tweets, open letters, and death threats with ease.

Such advances had passed this machine by. The keyboard on the screen refused to recognise the jabbing of my fingers. I tried coaxing the screen, stroking it, all to no avail.

But I had clearly angered the machine. It began to print three documents: one outward-bound ticket, one return ticket, and one receipt.

However only two items appeared. The outward-bound ticket, and the receipt. My return ticket was stuck inside. Through the window I could see my train. It glared at me.

“Help!” I yelped at a passing customer-facing railway executive. “Bad machine done bad thing.” My ability to speak was compromised by my panic. My train was leaving in five minutes and it was only the first of four trains I had to catch that day. If I missed this train, I would arrive at my destination some time after I was due to come home. I calmed myself and explained my predicament.

“Dum-de-dum-de-dum”, he sang, like David Cameron, as he went to get a key for the machine in no discernible rush. My foot was tapping faster than a hummingbird’s wings.

He opened up the machine and looked painstakingly through the various channels and crannies inside for my ticket. “No, there’s no ticket in there,” he eventually said. “I’ll have to give you a chit.”

He took me over to the counter and put the keys away. “Now, where’s the pen?” he wondered out loud. “There! There! It’s there!” I said, pointing madly. “Oh, yes,” he chuckled.

I realised I was in the worst of all predicaments – I was the person who was in a hurry, who needs somebody else who is not in a hurry to hurry up, and knows that pointing out the urgency of the task is the surest way to slow down that other person.

“Now, what’s the name?” he asked me. “Bainbridge,” I replied. This was no time for dissembling.

“How are we spelling that?” he asked. “B…I…A! No, wait! B.A.I.N…Bridge. As in…erm…high up road thing goes over rivers.” That was what my brain had decided was a good description for a bridge at that point.

He licked his nib and wrote my name very slowly. “B…A…I…” he said. The train was still there. It was going to go in one minute.

“OK, thanks, bye!” I said, tearing out of the office. I ran through the station to the train. “Too late, mate, I’m off,” said the train, its doors closing.

And I leapt, flinging myself through the sliding doors like Indiana Jones, catching my foot on the step, and landing flat on the carriage floor.